The following is from her letter of nomination:

Katelyn’s true leadership ability began to emerge for ASCLS while working with her mentors on a research project to chronicle the changing self-image of laboratory professionals since the founding of the Society. That research resulted in her participation with a panel of speakers to present a session at the 2020 ASCLS & AGT Joint Annual Meeting (JAM) on the role we each play in promoting a strong positive professional identity.

Her commitment to progressing the mission of ASCLS and the interest of Developing Professionals is noteworthy and admirable. She’s an incredible voice in the profession at such an early time in her career, and all of us in ASCLS should be proud to have such a passionate individual serving as the voice of students across the country.

The Ascending Professional Leadership Award recognizes a member of ASCLS who has contributed significantly to the field of clinical laboratory science and the Society within the first five years in the profession and who has made a significant contribution and shown a talent for leadership. Nominees for the Ascending Professional Leadership Award were Kate DeAngelo (ID), Jie Gao (AL), Alicia Kuzia (MI), and Alexandra Nussbaum (WI).

The following are excerpts from Alexandra’s letter of nomination:

Alexandra is an up-and-coming leader in ASCLS, contributing on the state, regional, and national Levels. Professionally, she works both as a medical laboratory scientist in a bench tech role and as a laboratory information systems analyst and received the Staff Excellence Award from her place of employment in 2020.

She has served on her state’s board of directors from 2018-2021. In addition to her position on the board, she also works on numerous committees including the Awards Committee, Virtual Meeting Planning Committee, PAC Committee Chair, and History Chair.

On a national level, she served on four different committees including Membership, Awards, Political Action, and Government Affairs. She has received the Voices Under 40 Award, Key to the Future Award, Omicron Sigma Award, and Board Service Award.

Do you know someone who would be a good candidate for one of these awards? The Awards Committee has already started processes for the 2021 awards, so be thinking of your nominees. Details about the awards can be found on the ASCLS Awards and Scholarships webpage. 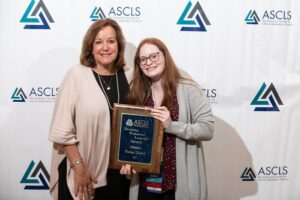 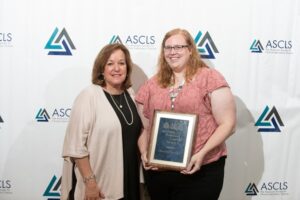 To see the full list of 2021 ASCLS awards and winners, please visit the Awards and Scholarships webpage.

Congratulations to all of this year’s recipients, and thank you to all who applied and sent in nominations. Your commitment and dedication to ASCLS and the profession drives the success of our Society and medical laboratory science. Thank you!