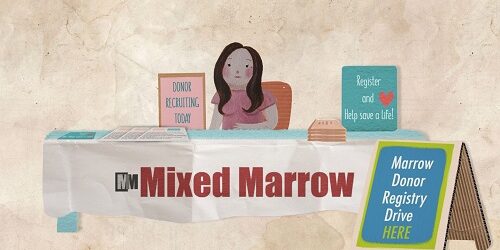 THE STRUGGLE TO FIND BONE MARROW DONORS FOR MULTIRACIAL PATIENTS

This past year I began a new position in the Histocompatibility Laboratory (HLA) at City of Hope. In this new role I search the national and worldwide bone marrow registry for patients in need of bone marrow transplants from matched unrelated donors. These patients do not have genetically-matched siblings, so the next step is to look for identical HLA twins who are unrelated to the patients. I am responsible for managing and selecting potential donors for patients.

A few months into the role I learned that certain patients have a harder time finding matched to unrelated donors. Most of these patients are of mixed ethnic backgrounds. When it comes to matching human leukocyte antigen (HLA) types, a patient’s ethnic background is an important factor in predicting the likelihood of finding a match because HLA markers used in matching are inherited. Some ethnic groups have more complex tissue types than others. So, a person’s best chance of finding a donor may be with someone of the same ethnic background1.

After learning about how mixed ethnic backgrounds hinder a patient’s search, my coworkers attended a national meeting hosted by the National Marrow Donor Program. At one of the meeting sessions was a screening of the award-winning documentary, Mixed Match. The film focuses on the fact that mixed-race people are one of the fastest growing demographics in North America. And because there are more mixed-race children being born today, there are more children diagnosed with rare blood diseases. Therefore, there aren’t enough multiethnic donors registered to fill demand, and a lot of sick kids are at risk of never finding a suitable donor. The film also explores the growing need for cord blood banks and advancements in the field of cord blood stem cell transplantation2.

The film’s tagline states that being mixed race is no longer just about identity, it can be a matter of life or death3. Mixed Match follows patients struggling to find unrelated donors; patients who were lucky enough to find matched unrelated donors of their same ethnic background; and someone who was able to donate marrow to save the life of a patient in need.

“We want to make sure people are educated and clear the stigma behind donating,” said Jeff Chiba Stearns, award winning documentary filmmaker and director/producer of Mixed Match.

“It’s hard for mixed people, but minorities as a whole are underrepresented,” stated Athena Asklipiadis, founder of the outreach group, Mixed Marrow, and featured in the film. “It’s sad to think a match might be out there, but that person doesn’t know or is too scared to donate. The documentary is meant to raise awareness and help save lives by encouraging and inspiring people to join their national stem cell registries.”

The film does a wonderful job of educating people about the stem cell donation process. Therefore, people who might have been scared or hesitant to join the registry will hopefully now be more willing to sign up. Not to mention, watching the struggle of patients who do not have donors is incredibly heart breaking and inspires viewers to want to help make a difference. To date, all screenings of the film have been followed by a donor drive. This is where a representative from Be The Match™ is available to assist people who want to join the registry. I have already collaborated with my hospital and local university to host two screenings of the film.

A Mixed Match screening event would make a great function for a laboratory get-together, a Lab Week event, or even a community service project put on by your hospital. If your hospital has an HLA laboratory you could pitch the idea to them.

If enough awareness is brought to the issue, we can increase the diversity of the registry, and patients who do not have matches will have a better chance of finding a donor. After watching Mixed Match, I have never felt more compelled to help.

Host a Screening or Get More Info

To host a screening, please visit mixedmatchproject.com for detailed information on how the process works. You can also email info@meditatingbunny.com and request a screening link to preview the film.

Visit the following websites for more information on the stem cell process, donation, and the film, Mixed Match. You can also find the following organizations on social media.