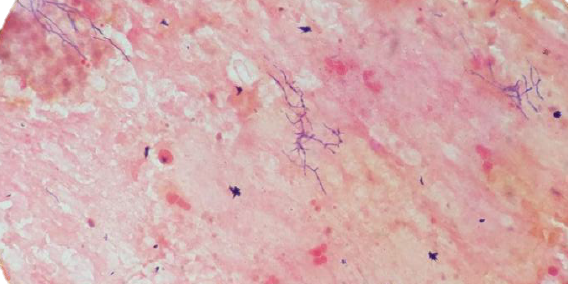 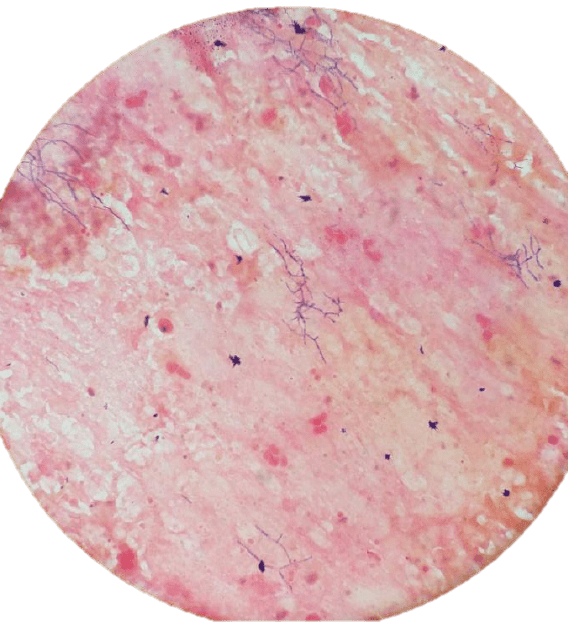 Case History
A 70-year-old male was transported by EMSA to the hospital after falling in his home. The patient had an established diagnosis of chronic lymphocytic inflammation with pontine perivascular enhancement responsive to steroids (CLIPPERS). This disease is an inflammatory disorder of the central nervous system and often presents as brainstem lesions.

The key characteristic of this disorder is that it is responsive to steroid immunosuppression therapy1. The patient had been responsive to the steroids used to treat this disorder, but recently showed an increase in neurological symptoms. Initially believed to be a result of worsening CLIPPERS, the patient had been showing symptoms of progressive weakness, general malaise, and falling.

Upon admission to the hospital, an MRI scan was performed, during which a brain abscess was seen. The patient was placed on empiric vancomycin treatment and brought to the OR for abscess drainage. During surgery, tissue was collected and sent to the microbiology laboratory for culture.

Laboratory Identification
The Gram stain of the abscess tissue showed 2+ Gram-positive bacilli that were beaded and branching. The organism grew well on 5 percent sheep blood agar and chocolate agar within two days incubation. The colonies were dry, and the organism was modified acid-fast positive but negative for the Kinyoun acid-fast stain. The isolate was reported as presumptive Nocardia species and sent to a reference laboratory for full identification, where it was identified as Nocardia nova by MALDI-TOF.

Discussion
Nocardia species are saprophytic organisms found in the environment in places like soil and water. They are a suborder of the aerobic actinomycetes, and microscopically appear to be finely beaded and branching Gram-positive bacilli3. They can appear to have small branching hyphae but are not considered to be related to fungi and do not respond to antifungal treatment.

Due to their lack of virulence factors, they are most commonly seen in immunocompromised patients with decreased cell-mediated immunity, although they have been known to cause disease in some immunocompetent individuals2. The most common site of infection is pulmonary. Of the extrapulmonary cases of nocardiosis, the central nervous system is the most common location for infection and often present as abscess formation. Symptoms are insidious in developing, and eventually present in patients as headaches, nausea, vomiting, seizures, or alteration in consciousness2.

Laboratory identification can be difficult, as Nocardia are typically slow growing and take two to six days to initially grow on laboratory media. On a Gram stain, the organisms can resemble hyphae in some cases or acid-fast bacteria (AFB) in others. They are weakly acid-fast, and a stain using a weaker acid (0.5-1 percent sulfuric acid) compared to a typical acid-fast stain will yield a positive result. However, they will present as negative when subjected to a regular acid-fast stain (ex. Kinyoun stain). The colonies are often dry and breadcrumb-like. Current bacterial identification methods for Nocardia include 16S rRNA gene sequencing or mass spectrometry via MALDI-TOF3.

The treatment of choice for nocardiosis is a sulfonamide, which proves to be an active agent against most species of Nocardia3. In this case, after initial Gram stain results were reported, the patient was switched from empiric antimicrobial therapy to trimethoprim/sulfamethoxazole with success. This patient is a case in which induced immunosuppression due to inflammatory disease resulted in an opportunistic infection of Nocardia nova in the brain.

Alison Rossdeutscher is a medical technologist at Saint Anthony Hospital in Mustang, Oklahoma.