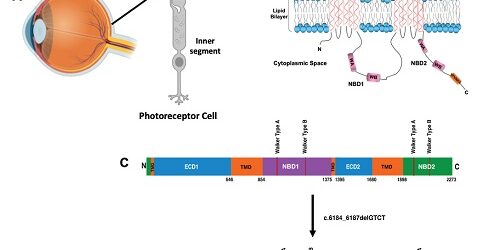 Novel variants of unknown significance are often discovered through genetic testing, which may give rise to the unclear prognosis of pathogenicity. Integration of molecular diagnostic testing with in silico bioinformatic tools and biomedical research can provide enhanced clarification on disease association of these variants. In this report, we describe how integrated approaches were used to predict the pathogenicity of a variant of unknown significance in the ABCA4 gene identified through next-generation sequencing. This case has shown that bioinformatic tools used in conjunction with genetic testing can enable healthcare providers with a holistic assessment for pathogenic variants identified through molecular diagnostic technologies.

Recently, N. Wangtiraumnuay et al. reported the case of a healthy 11-year-old female of asymptomatic parents with a gradual vision decline in both eyes over a four-year period. The patient’s clinical phenotype was determined to be consistent with the features of Stargardt disease through standard ophthalmologic testing. The patient presentation prompted molecular testing for specific genes associated with visual diseases, particularly Stargardt disease. Through next-generation sequencing, a heterozygous paternally inherited ABCA4 variant of unknown significance, c.6184_6187delGTCT, was identified.1

ABCA4, a retina-specific membrane transporter localized in the photoreceptor outer segment discs, is essential for the visual cycle (Figure 1A). ABCA4 variants have been associated with a spectrum of autosomal recessive retinal degeneration which culminate in blindness, including Stargardt disease, fundus flavimaculatus, and cone-rod dystrophy.2 The disorders differ from one another with respect to their age of onset and rate of disease progression. Despite the identification of approximately 1,200 disease-associated ABCA4 alleles, the phenotypic-genotypic correlations remain unclear.3 Recently molecular diagnostics has made significant strides in clinical ophthalmological practice for diagnosis and genetic counseling.4

A variety of methods were utilized to understand the genetic and proteomic consequences of the clinically reported c.6184_6187delGTCT variant in ABCA4. Bioinformatic analysis recognized that the mutation is localized in the mid-region of nucleotide binding domain 2 (NBD2) (Figure 1B). Further in silico studies revealed that this four-nucleotide deletion resulted in an alteration of 51 amino acid residues and a premature stop codon, ultimately, truncating the 2273 amino acid protein by 161 amino acids, including the well-conserved VFVNFA motif in the C-terminal domain (Figure 1B). Multiple-sequence alignment of other ABCA transporters show that the VFVNFA motif is a well-conserved sequence which may have more profound functional implications on the overall ABCA4 transporter function. Molecular diagnostic testing and bioinformatic assessments suggested that the ABCA4 sequence variant is pathogenic, however, still lacked the functional validation at the protein level.1

Biomedical research was further used to validate the loss-of-function of the Stargardt-associated ABCA4 variant by functional characterization of recombinant proteins.6 Interestingly, the ABCA4 variant resulted in the loss of less than 7 percent of the protein, which included the VFVNFA motif (Figure 1B). Structurally, the variant harbored a disrupted C-terminal region and led to the deletion of the Walker B motif, the VFVNFA motif, and crucial secondary protein structures (Figure 1C).6 Data obtained from subsequent biochemical studies demonstrated the significant attenuation of functional activity and intra-protein molecular interactions. Thus, it was crucial to assess the importance of this genetic variant on the overall biologic function of the protein.

Overall, a holistic combination of molecular diagnostic testing, clinical assessment, bioinformatics, and biologic functional analysis correlated the ABCA4 variant to the proteomic consequences and its pathogenicity. Genotyping is standard practice for identifying pathogenic variants, however, as technology is becoming more sophisticated, an increasing number of novel variants of unknown significance are discovered. Through a collaborative approach involving medical laboratory scientists, clinicians, bioinformaticians, and biomedical researchers, explanations of novel variant phenotypes identified by molecular diagnostic testing may provide evidence-based genetic counseling and therapeutic decisions in the future. This case further emphasizes the importance of molecular theory and practice in clinical laboratory science curricula.

Work supported, in part, by NIH (EY013113 to EEBF) and funds from the University of Delaware College of Health Sciences (Newark, DE).

We thank Drs. A. Levin and N. Wangtiraumnuay, and Ms. J. Capsso (Wills Eye Hospital, Philadelphia) for helpful discussions and the Graduate College at the University of Delaware (Newark) for the Summer Doctoral Fellowship (to MJP).

Meera J. Patel is a PhD candidate in the Department of Medical and Molecular Sciences, University of Delaware, College of Health Sciences, in Newark, Delaware.

Subhasis B. Biswas Professor in the Department of Medical and Molecular Sciences, University of Delaware, College of Health Sciences, in Newark, Delaware.

*Esther E. Biswas-Fiss is Professor and Chair of the Department of Medical and Molecular Sciences, University of Delaware, College of Health Sciences, in Newark, Delaware.