Current blood banking policies in the United States require screening blood donors for behaviors that might increase their risk of infectious disease and then deferring them if necessary. Donor blood is also screened by serological and nucleic acid tests for various known transfusion-transmissible diseases to ensure safety and protect the transfusion recipients. The present tests required in the United States are for detection of HBV, HCV, HIV-1/2, HTLV-I/II, Syphilis, WNV, and Chagas disease.1 However, these are just a few of the possible transfusion-transmissible diseases and deciding whether to screen or test for a disease can be difficult and includes many factors. 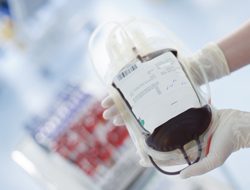 AIDS serves as an example of the challenge of meeting an emerging threat. When AIDS was first recognized in the United States in 1981, the causative agent was unknown, as well as how it was transmitted. There was also disagreement in the medical and governing agencies about how to respond. This uncertainty and lack of consensus delayed strong action to protect the nation’s blood supply in the immediate years following AIDS discovery.2 As a result, many people contracted AIDS from transfusion of blood products. Exact numbers during this time are not available, but a 1991 study estimated that over 2000 recipients were infected by HIV-1 from 1978 to 1984 at one San Francisco blood bank alone.3

To avoid this outcome in the future when responding to emerging infectious diseases (EIDs), retrospective analyses showed how the process could be improved. Committees were formed and recommendations given to develop a more systematic approach of defining and prioritizing EIDs and determining the appropriate response or interventions.4

In 2009, the Transfusion Transmitted Diseases Committee from AABB, published a supplement that identified and characterized 68 EIDs that posed varying degrees of risk to transfusion safety and of which current interventions are inadequate.5,6 Since that time, six more EIDs were added along with fourteen updates.7 The AABB’s goal was to provide a set of tools for the blood bank industry which in the United States has more than 70 blood suppliers.8 The supplement defines EIDs as infectious diseases with increasing incidence in the last 20 years or have the potential to increase. They can emerge as new human infections perhaps from crossover zoonotic infections or they can be known agents which have expanded into new areas. They can also be existing human pathogens that have recently been recognized or agents that are re-emerging in areas once controlled. They pose a potential threat to transfusion safety if they have an asymptomatic blood-borne phase, if they can persist in stored blood products, and if they can infect intravenously.6

The supplement also describes a priority or ranking system of red, orange, yellow, or white to help assess the risk of each of the EIDs. The ranking is based on scientific and epidemiologic evidence of risk to blood safety and public perceptions and concerns regarding the risk. Protecting the blood supply depends not only on the underlying science but also on the more subjective expectations of society. High public perception of risk tends to lead to a public demand for action to reduce the risk.6 A recent example of this is Zika virus in which the FDA in 2016 advised that all blood products should be screened for Zika using investigational tests for the time being. Dr. Susan Stramer of the American Red Cross suggests this policy is likely prompted more by media attention and public fears than by data.8

Although the rankings have a degree of subjectivity and a different set of reviewers might come to different conclusions, it provides a framework to compare. The red category represents EIDs with the highest priority. They have low to high scientific or epidemiologic evidence and have varying levels of public perception but may cause severe clinical disease. Human variant Creutzfeldt-Jakob disease (vCJD), Dengue viruses (DENV), and Babesia species are in this category. Interestingly, these three diseases are all caused by different types of agents: prion, virus, and protozoa. This demonstrates the variability of EIDs and the challenge of protecting the blood supply from agents with differing biology and life cycles.

Part 2 of this article will appear in the next issue and will continue the discussion of high-priority EIDs mentioned above.