A Case of Blue-Green Neutrophil Inclusions 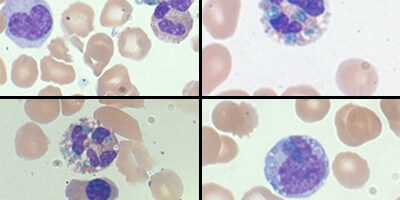 Lactic acid, troponin-I, and procalcitonin were elevated upon admission to the medical center. Liver enzymes were markedly elevated and renal function was severely impaired. CBC showed an elevated WBC count with a left shift and normocytic anemia. Evaluation of the peripheral smear demonstrated blue-green inclusions in the neutrophils and monocytes. These findings were acknowledged but not reported on the patient chart.

Due to the severity of the multi-organ failure, the patient’s family chose to discontinue medical treatment, and the patient died shortly after discontinuation of care, approximately three days post elective surgery.

Blue-green inclusions in the neutrophil have been reported in association with hepatic failure and have earned the coined term, “death crystals,” as most patients with these inclusions decline rapidly and death is imminent. Discussions have been ongoing about the importance of reporting these inclusions.

The blue-green inclusions were originally thought to represent hepatic injury. Recently, they have been found in cases with tissue injury but with no evidence of hepatic injury or elevated liver enzymes. In these few cases, there has been an elevation in LDH suggesting some level of tissue damage.1 Because of the hepatic injury association, the nature of these crystals was thought to be a “blood-borne bile product” in circulation.2 However, more recent studies have shown them to be bile (Fouchet) stain negative.3 These inclusions have shown to contain high lipid content using Oil Red O and transmission electron microscopy.3 These inclusions have also been found to be acid-fast (long Ziehl-Neelsen method) by Hodgson et al. Similarities between these crystals and the composition of sea-blue histocytes have been noted further suggesting the association of these crystals with tissue injury.3 These inclusions are thought to contain lipofuscin-like deposits representing lysosomal degradation products that have been phagocytosed by neutrophils and monocytes because of their staining, lipid content and acid fast nature.3 The inclusions are more often found in neutrophils than in the monocytes, possibly due to the phagocytic efficiency of neutrophils in circulation.3

Another interesting predictor of survival for a patient with blue-green inclusions in the neutrophils and monocytes is the severity of lactic acidosis at the time of discovery. The patient in our case study was thought to have aspirated while under anesthesia during her elective surgery leading to the question of whether the lactic acidosis was due to lung injury. This is supported by her initial arterial blood gas results while on mechanical ventilation and 100% oxygen: 7.31/29/82/15.9 (pH 7.35-7.45, pCO2 35-45 mmHg, pO2 80-100 mmHg, HCO3 21-28 mmol/L). Additionally, her blood gas lactic acid was 9.7 mmol/l (reference range 0.5-2.0). Hodgson et al suggest that arterial lactic acid may be a stronger predictor of survival than liver enzymes when blue-green inclusions are detected noting that those with severe lactic acidosis were more commonly associated with death. The patient in this case demonstrated blood gas lactic acid values as high as 12.9 mmol/L (Table 1) which is consistent with the reported association between arterial lactic acid >5.0 mmol/L and increased likelihood of demise.3

When reviewing cases presented in the literature, most patients with blue-green inclusions had varying degrees of hepatic injury indicated by the liver enzymes.1-6 While not all patients with blue-green inclusions were found to have hepatic injury, the association of the inclusions with hepatic injury may be a direct result of failure to report the inclusions when seen. A recent study at the University of Rochester instituted an “increased awareness” campaign that lead to an increase in detection of the blue-green inclusions, although still overall a rare finding at approximately 1 per month.6 This increase in detection revealed cases that did not have a direct relationship with liver injury including metastatic cancer and sepsis; however, all of the patients had mild to severe elevations in liver enzymes.6 Unfortunately in this study, arterial lactic acid was not a reported laboratory value. 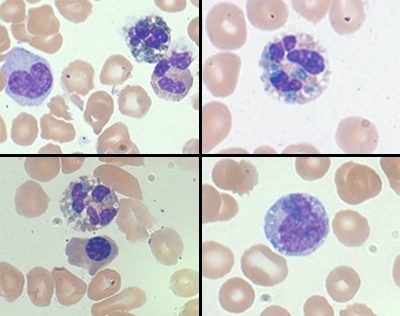