This recognition celebrates an ASCLS member who has made significant contributions to ASCLS at all levels. This is the seventh year for this award. The recipient will have made significant contributions to ASCLS as well as the laboratory field, and who, by example, has inspired others. There were three nominees this year including Carey Loveland, Michigan; Janet Hudzicki, Kansas; and Rick Panning, Minnesota. 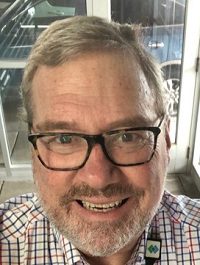 The 2020 ASCLS Lifetime Achievement Award was awarded to Rick Panning. Rick has served in many capacities for ASCLS-Minnesota, including as president in 2001-02. He has chaired or planned the program for many state collaborative meetings, where his ability to work with other sponsoring organizations has been well recognized. He has mentored less experienced members to work on all aspects of meeting planning, resulting in years of successful meetings.

Rick served outstandingly as Region V director and ASCLS president. Subsequent presidents have called on him to chair or serve on task forces that developed position papers on levels of practice, healthcare reform, Doctor of Clinical Laboratory Science, and personnel licensure. He also chaired the Root Cause Task Force and served on the Constituent Society Task Force, both of which addressed long-standing issues that have plagued ASCLS.

The following is from his letter of nomination: “Rick has answered the call to serve at every opportunity and is known for his knowledge, problem solving ability, and consensus building. He is recognized for his great expertise, especially in the areas of government affairs, personnel licensure, strategic planning, and acting as liaison to other organizations. We who have been fortunate to work with Rick over the years value his mentoring and consider him a true friend. We believe that his work for the profession is unparalleled and makes him supremely deserving of the Lifetime Achievement Award.”